The advantage of a kinematic mount is that it locates one rigid body relative to another with very high repeatability, without over-constraining the body or introducing instability. It accomplishes this by using the precise number (and arrangement) of contact points needed to allow the desired degrees of freedom – no more and no less. That is the principle of kinematic constraint, which this article will show how to apply in your designs.

More than N points of contact results in uncertainty and instability. We’re all familiar with a table that has an annoying rock. We just want to be able to move the table (translation in x and y) and turn it (rotation about z), which requires N = 6 – DOF = 3 points of contact.

But the table has four legs, the legs are slightly different lengths, and the floor is uneven, so an unknown (indeterminate) and different combination of three legs contact the floor wherever it happens to be.

The Advantage of Kinematic Constraint

This simple analogy illustrates important concepts that apply to precision machine design and optomechanical design. Even an apparently flat surface like a base plate isn’t, at some level, flat. And the four pads on a mating subassembly are not truly coplanar. By bolting them together, we force them to conform, to deform, to strain. This can have a number of ill effects:

The advantage of a kinematic mount is that it is not, by definition, over-constrained. We do not build in distortion that can affect performance or strain energy that can cause frustrating change in performance over time.

Position and orientation, as far as the degrees of freedom we choose to control, is also determinate.

And if we carefully select and arrange the our points of kinematic constraint, the mount is also stable and resistant to shock, vibration, thermal effects, and other loads.

The Building Blocks of a Kinematic Mount

There are three fundamental building blocks of kinematic mounting that can be combined in various forms to achieve your design objectives:

There are variations on these classic forms, as well as truly novel kinematic mounting techniques. But these three are important both for:

The component features do not need to be of perfect size or form[1]: A ball doesn’t need to be a precise diameter; a vee need not be an exact angle; and plane need not be parallel to some reference

But the surfaces should be smooth over the intended range of motion or area of contact.

That said, precision components such as balls and vees are readily available off-the-shelf from vendors like Bal-Tec, if your design can accommodate them (space constraints often require you to roll your own).

[1] This exception applies only to the surface by itself. If it’s combined with other geometry, such as the ball end of an adjustment screw, geometric tolerances such as the concentricity of the ball with the screw axis is important. If it’s off-set, a cyclical variation could be introduced. More on this in a later discussion on adjustments.

Figure: A ball on a flat (left), concave (center), or convex (right) surface has 5 degrees of freedom

A ball on a surface has a single point of contact, eliminating the translational degree of freedom normal to the surface.

Typically, we think of a flat surface, but the same applies to most curved surfaces. An exception would be a concave surface with a local radius of curvature smaller than the radius of the ball, which might have multiple points of contact or a circular line of contact.

The ball on a convex surface illustrates the need for some kind of preload to enforce the contact. In many cases, as in the ball on a flat plate, gravity may be sufficient. Preload will be a subject of a later discussion.

Figure: A ball in a vee has 4 DOFs: three rotations and translation along the direction of the vee

As in the case of a ball on a curved surface, the path of a vee need not be a straight line.

And as noted earlier, the precise form of the geometry is not critical. In fact, it need not be a vee at all to achieve the same result. For example, two parallel rods can perform the same function.

Figure: A ball in a trihedral socket is only free to rotate (3 DOFs)

A ball in a trihedral socket has three points of contact, eliminating all three translational degrees of freedom and leaving only the rotational degrees of freedom. A trihedral socket may not be a familiar component; the article Machining and Modeling Trihedral Sockets for a Kinematic Mount discusses the component as well as alternative constructions for accomplishing the same or approximately the same result.

The ball component in the above examples is no longer a complete sphere:

This raises an important distinction:

With the bodies translational DOF fixed, the flat plane can still assume an infinite number of positions in space (but not any position), while the rigid body is rotated about a fixed center.

The configurations below demonstrate this concept. We’ll discuss the design and tradeoffs of these and other arrangements – including such considerations as stability, resolution, and interchangeability – in detail in another article.

Figure: A rigid body contacting a surface at 3 points has 3 degrees of freedom, whether that surface is flat or curved

A rigid body with three point contacts on a plane (the left configuration above), is like our stable table, with three degrees of freedom:

But we don’t need to confine ourselves to planar geometry. The configuration on the right, a rigid body with three point contacts on a spherical surface, also has three degrees of freedom:

Recognizing and letting go of such self-imposed design constraints can be a challenge, but it can enable novel and elegant solutions. We’ll see more examples of this in other articles.

Figure: A Maxwell clamp – three balls in three radiating vees – is fully constrained, but not over-constrained.

The device shown above is commonly referred to as a Maxwell clamp – 3 balls in 3 vees radiating outward. This fixes all six degrees of freedom. When used in such a configuration, it is called a kinematic coupling. Despite not featuring an adjustment, a coupling has a number of practical benefits and uses, including:

We’ll look at the design and tradeoffs of these and other arrangements – including such considerations as stability, resolution, and interchangeability – in detail in another article. 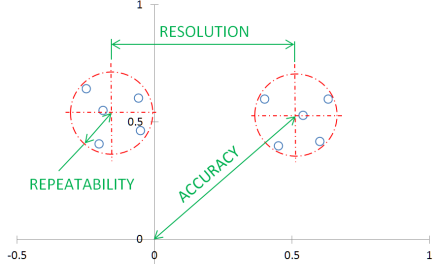